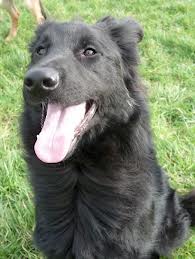 Six years ago, Mr. T observed a van stopping to let out a small pup.  He thought that the pup was just being let out to relieve himself.  Imagine his shock when the van drove off and left the pup!  The Shepherd/ Lab pup was only about 3 months old.  He tried to lure the pup to him trying a bit of food, but the pup resisted.  Finally, he just threw the bit of food and the pup ended up jumping on him.  More shock was to follow.  The pup suddenly had an epileptic fit.  This prompted the first of many visits to the clinic.  Mr. T advertised the abandoned pup for a week, but nobody claimed him.

The pup, now named Ringo , found a home with Mr. T.  His seizures continued, but he is on constant medication to control them.  Life continued until this past June when Ringo began to vomit.  He was diagnosed with a blood disease that was destroying his bodies own blood cells.  It was a life or death situation.  He spent two weeks in the hospital under constant care and many visits by his devoted family.  What joy there was the first day he wagged his tail.  Happy ending, right?  Not yet.  He was further diagnosed with a thyroid problem.  He had more follow up work.

His veterinarian, Dr. Farag remarks that he is one of the lucky ones.  Ringo is now in remission and back to his perky self.  Mr. T compliments Dr. Farag, Dr. Farag compliments the owner and at the core of it all is Ringo.  When asked about his determination with Ringo, Mr. T replied, “I love all animals, although I was not eager to have him treated with chemotherapy.  The cost might have been too much.  However, I wanted to see him get well.”

Ringo is back to stealing the cats food at home and his owners could not be happier with his improvement.