Broken Nail – Case of the week from Dr. John Glauser 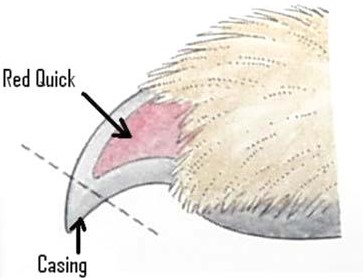 This week, we examined a dog with a commonly seen, painful injury to the nail.

After our canine patient spent a few days hiding his paw from his owners, they were finally able to see the characteristic angular deviation of the tip of the nail – a sure sign the nail has broken.

Dogs can break their nails easily when they run on an uneven surface and the nail catches on a hard object.  Dogs with long nails are at a higher risk of injuring them.

When the nail breaks, the hard casing breaks off, exposing the extremely sensitive ‘quick’ inside.  Anything that touches the exposed quick causes discomfort.  Dogs tend to want to lick the sensitive area and may limp on the affected paw.

Many times, the nail partially breaks but the fragment remains attached.  In these cases, we will sedate the patient and apply local freezing to prevent the patient from feeling any pain.  Following this, the nail is trimmed past the point of the fracture to remove the broken casing and any exposed quick.  Any bleeding is controlled and the paw is temporarily wrapped with bandaging.

In our case this week, the fragment had already fallen off, leaving only a small exposure of the ‘quick’.  Topical anesthesia (freezing) was applied to the exposed quick.  The soft quick material was ‘pushed’ back under the existing nail sheath and the area was protected with liquid bandage, followed by a traditional bandage for the paw.

After rechecking our brave patient today, we confirmed there is no longer any pain in the nail and he can return to normal activities!